This is just update regarding the Typewriter Remington keyboard for Devanagari,
2-3 months back there was request on OT list regarding problems they are facing while using Remington keyboard, and they were shifting to windows just due to this.
http://mm.glug-bom.org/pipermail/linuxers/Week-of-Mon-20100329/069909.html

"Please tell me how to type "आप" using regington keyboard
Also, in window, I use to type  "shift h  + k + w +  [ + k  " for writing Bhookh भूख
But in Linux Fedora + IBUS + Remington, I HAVE to type
"shift h  + backspace + w +  [ + backspace "
This is giving us a lot of un-comfort and our whole organization is migrating on windows again just because of this problem."

when me and parag tested same got to know that this was happening since Remington keyboard mim file was written in one-to-one key mapping and there was no intelligence for handling these things. And one need to learn new things while migrating from typewriter to Computer typing.

Parag worked on it, and presently it is in good shape, and same is now available in upstream :)
just file a bug against fedora, so now it will be now available default to user from Fedora 13 https://bugzilla.redhat.com/show_bug.cgi?id=591810

I think it will be good if people listen from such mailing list and report bugs to appropriate package, so person related with it can work and fix it quickly.
Posted by Pravin Satpute at 1:59 AM No comments:

Updates on W3C conference, May 6-7

It was really good experience to attend w3c conference (http://w3cindia.in/conf-site/conference-index.htm) . Most of the people including Dr. Jeffrey Jaffe, CEO W3C were present at the conference, representative's from Google, IBM, Microsoft, Red Hat (me), Opera and many were there.

1) Web Accessibility for Disable (Dr. Mohan Dewan made a good point saying able vs disable. He said "disable" is not the good word it should be "differently able", Ms. Shilpi Kapoor made to attention on there are many people who need's improvement from accessibility perspective example given like many people have specs, also there are large number of people can't here properly in some extent. etc.)

2) Web For mobile is also one, and there is limitation on screen resolution when accessing web. Idea of having different web sites as per device is really bad. Also there was suggestion i.e. it will be good if there some kind of mechanism so that server will understand clients resolution/device type and deliver web site in that form to client.

3) WAV: Voice Access to Web Information for Masses , Dr. Om Deshmukh, IBM India. suggested there are lots of challenges in this area. and need some standardization.

I presented on need for standardization and issues related to Unicode in conference.
Standardization: Web should be render same,  no matter what browser of what Operating System. It need some standard guideline from language and script perspective.

Since Inaugural Session took long time in first days as ministers were late due to some other activity. Technical Session got a very minimum time. I was expected 20 min. for my session but got only 12-13 min. So could not able to give demo. of UTRRS and Unicode Issues. But after presentation got some good comments from audience so i think my message got delivered well in small time.

Really chair person's had a hard time to finish all speaker's talk within a given specific time ;)

I think there will be now different meeting/discussion from W3C India office as per topic and interested people, as W3C involves in lot of different things. 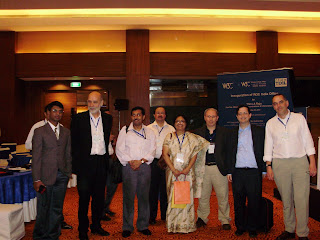