Attended number of talks on day 2.
Second day, Noriko introduced me with Jona. Jona recently conducted two translation sprints for Albania. Noriko and Jona both were at Fedora booth on second day. Happy Noriko was in Devconf she helped to gather contributors interested and working for Globalizing Fedora :) I also spared sometime with them near Fedora booth. We decided to talk more in G11N meetup planned at 4pm.

We started moving to meetup room around 4pm. It was me, Fale, Jona, Noriko and puiterwijk. I earlier thought it will be quick meetup but gradually we discussed number of topics and it went on and on :) I learned lots of interesting things from localization point of view.
Unfortunately markers was not working well and we started to add points to piratepad. 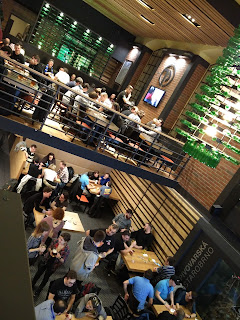 It was Networking Party day at Starobrno brewery pub. It is big pub and party was on till 2am but unfortunately next day my talk was there also don't wanted to miss Denise and Matthew talk in morning. So with heavy heart back to hotel around 11pm.

And here comes my talk, First of all it was Sunday afternoon and parallel talk by Ralph Bean :) Even i was interested in attending his talk ;)

But happy, most of the people interested in G11N were there including Remy :) I made sure to make it more interesting by showing Voice Recognition Elevator - ELEVEN funny video demonstrating problems of non-globalized voice operated elevator system and same time technical.

Slides of my talk are available on slideshare. I intentionally avoided details on L10N, since Noriko's more detailed talk on L10N was next.


It was good after my talk there was Noriko talks, it came in natural flow and few more people were there in Noriko's talk including docs members.

Then i went for lunch, found Matthew alone there at booth. Had good discussions with him on G11N, Flock and FUDCon and how to increase contributors and also bit roughly talked on idea of having G11N FAD with flock so more people from G11N can attend flock also they can have FAD.

Then comes final session...Grand Finale! Win Win Win!
Wow, it was hosue full and great to see happy faces all around with excellent DevConf. I liked the way, goodies distributed with easy competition. Though it sounded it was not since, most of the people sat down after few questions ;)

Then bye bye bye to all. Wanted to attend EMEA Ambassadors FAD but i was very tired and also next morning early flight to Mumbai.  Me, Huzaifas and Sinny moved to nice dinner at Pizzeria Al Capone to have Pizza.

At morning 6am started tiring journey back to Mumbai. Thought it was 24hrs but its always feels good to return back home, specifically after back to back conferences :)
Posted by Pravin Satpute at 11:47 PM No comments: Links to this post

This was my first DevConf, not able to join last year due to other schedules. Had very good experience and if get chance definitely would like to attend DevConf 2017 :)


contd...
Posted by Pravin Satpute at 11:08 AM No comments: Links to this post

This happened in Fedora - Myanmar community office. Location is nice and ideal for hacking
We came around 10:30 but since few more people were stuck in traffic decided to start bit late. Cake was ready and then me and Leap decorated it with DVD's and stickers. 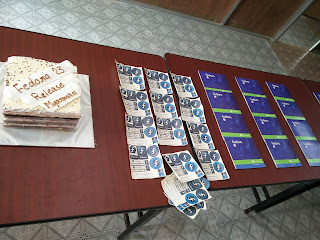 We started with introduction of all participants. Most of the participants were already Fedora users around Fedora 20. Interesting part was they all were more from the users side of Fedora, so decided to put more strength on how they can move ahead and become contributor.

As per schedule Yan started with introduction of Fedora. He talked on "how he came to Fedora world". He mentioned regarding earlier he was not happy with Fedora for not providing media codecs but later learned its because Fedora follows strictly FOSS principles.

Then Leap, started talk on how one can contribute to Fedora even if he is from different domains. I was adding few points with him as per required. 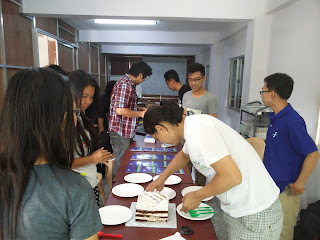 It was already around 1pm, so we decided to cut cake and go ahead with lunch.  During same time around 10 students joined from "University of Computer Studies Yangon”.

Lunch was very special since it was home cooked by Wai Yan (John Reginald) and other Fedora members here . Really excellent place, you can cook, eat, work and hangout :)  Appreciated cook and gang helped to him. Indeed very lucky to get in-home cooked food in Myanmar. Much much better than outside food.

Must say thanks to Yan Naing Myint for sponsoring lunch and lovely cake for Fedora 23 release !!

During lunch, we had some discussion with students, we got some interesting questions. Leap helped to answered regarding Admin side and me more from Development side :) I wondered no one from Myanmar contribute to GSoC.

Two students were from Tamil and one from Bihar and they specifically mentioned it, Glad to see Indians in event.

We started after lunch and Yan again started with Fedora intro talk. This time it was in Burmese language, he explained number of topic. Including how to get Fedora and what are Fedora philosophies. 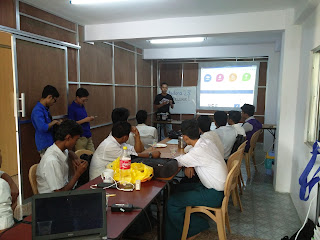 Then we asked Leap to talk on How to contribute again :) 3rd time in 2 days he was talking on this topic ;)

This time even much better and had good impact on audience. 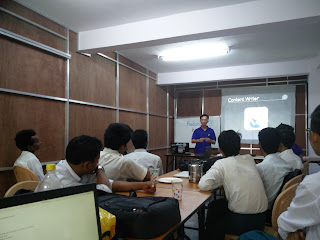 Then i started bit interactive talk on "What students required?" and "How can they get it from Fedora?". I mentioned one point during talk is to start using Fedora and start play with system and report issues. Also shown them what patch does mean.

Audience requested if they can know how to install Fedora.  Here Yan started with demonstration of Fedora 23 DVD's. He explained in details most of the topic and in middle i highlighted missing things from Myanmar, i.e English (Myanmar)  locale, no translations and recommended if they are interested they can contribute into it.

We all decided to take Tea break, while packages were getting installed. We moved to small local stall for Tea. 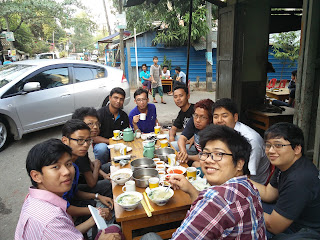 Then it was already 6pm and attendees were planning to go home, thought will quickly check newly installed system. Later Yan shown them how to create FAS, there name Wiki page and bugzilla account.

After everyone went we started working on testing Internationalization support for Myanmar (Burmese) language. I demonstrated few things to Yan and asked him to check with hall.  Then we started creating Myanmar localization group, we completed all steps.  Luckily we found noriko on IRC, she also checked those things Only thing remained was to create group in Zanata.

Around 8:30 me and Leap left from Venue.  Mostly decided not to meet on second day, since we had flights around afternoon and attendees mostly comes post lunch session.  Also our Hotel was bit far from event place and Yangon is also well know for Traffic Jams ;)

This way we had nice Fedora 23 release event. Next day planned more work by attendees to Fedora. i.e. becoming contributor to Fedora. But not much happened since it was working day.
Posted by Pravin Satpute at 3:49 AM No comments: Links to this post

Lucky enough i got a chance and i actually able to made it to BarCamp 2016. I had bad experience with Bangkok Airway during travel, that listed in other blog.

But its full of nice experience after coming to Myanmar. People here are very supporting and kind and indeed nice place to visit.

Our plan was to represent Fedora strongly with multiple talks. Me travelled from India and Leap Soak from Cambodia. We had 2 meetings before BarCamp Yan and his team mates.

Yan suggested to be at BarCamp around 8pm, so we will get slot quickly. I already thought its too early but since this is my first BarCamp tried to be early.

Me and LeapSoak reached early around 8:30 to MICT Park. Location was indeed good with nice campus and good crowd.

Inauguration started around 9am, we were standing in front row but not helped much since all talks were in Burmese language ;)

After inauguration, everyone started running to propose there talk for BarCamp. They were allowing only 1 talk per person. Me submitted talk on Learning Unicode. I thought there will be some voting on talks to get it finalized. But it was almost 13 parallel tracks and enough to accommodate all talks.

Since most of the talks were in burmese language we were simply doing networking there. During time i requested if i can submit one more talk and luckily got permission :)  I submitted other talk on "Basics of FOSS and Introduction to Fedora". It was scheduled in main conference room.

We planned to distribute Fedora 23 DVD's during this talks but we actually forgotten DVD's at hotel ;)  Our hotel was near to Venue so i quickly took taxi and collected DVD's for distrbutiion.

Felt good for getting chacne to talk on "Basic of FOSS and Introduction to Fedora". Got number of questions mostly on Fedora side. I felt few people were finding it difficult to understand either English or may be its our ascent, so Yan did transaltion for me for few questions.  We distributed 50 DVD's to interested participants and also announced regarding Fedora 23 release event just after BarCamp. 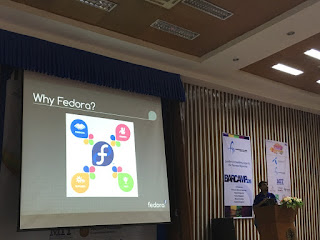 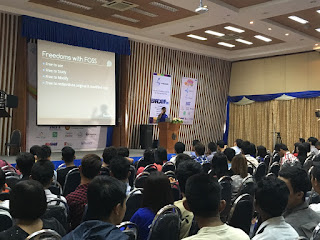 Room was bit smaller, for around 20-30 people. 30+ students attended talk by standing. I covered all basics of Unicode. Number of people came after talk and said they want to move ahead with Unicode from zawgyi and need support from me. I forwarded my presentation to them. 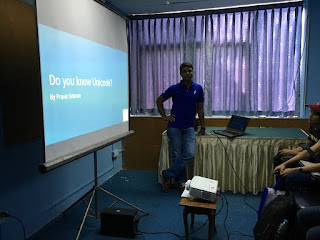 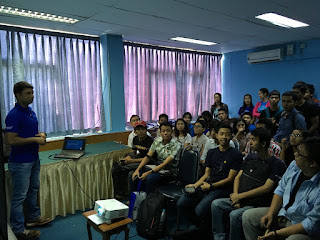 Since all other talks were in Burmese, was simply waited there for some time and went to Hotel.

Leap mate with some old friends at BarCamp first day and we decided to go China Town for dinner, had good time with all. 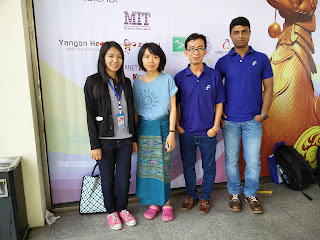 Second day was bit relaxing. Reached to BarCamp around 9:30am, still came to know, they accepting talks around 10am. Attended there first talk, something like KeyNote. It had few impressive stats regarding How many people registered, how attended on first day. etc. 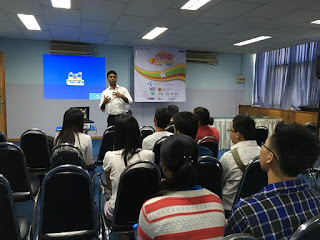 Had one technical issue, projector cable was not working.
There was less audience, just thought will start presenting on Laptop.  Again covered some basics on "why do need language supports?" and few other things. I mentioned we need some active people from Myanmar in Fedora Globalization. Meanwhile organizers brought working project cable and i moved to projector :)

Had over all good talk and lots of questions and discussion. Few more people again mentioned issues regarding Unicode and Zaw-gyi. I provided slides of my Unicode talk to them. I think there are number of people wants to move Unicode but i am still not clear what is issue. I think they are planning to write some article on issues. Looking forward to work with him on this.
Around 5pm, BarCamp had closing ceremony, where again language of communication was Burmese :)  They distributed gifts with lucky draw to students. 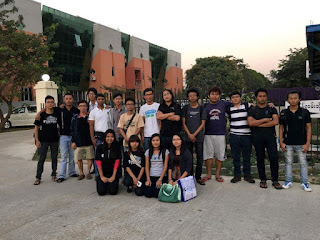 Posted by Pravin Satpute at 1:09 AM No comments: Links to this post